Here is a discussion about the effects of NOAA introduction of  ERSST.v4.

Later part deals with the latest status of the current El Nino event.
Current status: A strong El Nino which is now declining.

As an example see how it has affected the current El Nino event. We know that a Full fledged El Nino was confirmed at the end of March 2015 when the five consecutive 3 month running mean based on ERSST.v3b SST anomalies in the Niño 3.4 region (5oN-5oS, 120o-170oW) had ONI index of +0.5 C or higher. See my last year’s update of 7th April 2015 part of it reproduced in bold here under:

Full fledged El Nino was confirmed only at the end of March 2015 when the five consecutive 3 monthly seasons had ONI index of 0.5 C or higher. Incidentally it has barely made it to a full fledged El nino. The March SST for Nino 3-4 region is 27.72 C. If however, this SST was a wee bit lower at 27.68 C ( a difference of 0.04 C only), the ONI Index for JFM would have been 0.4 C and the El Nino would have gone bust (the fifth consecutive 3 monthly season would not have qualified for El Nino).

The above points to be kept in mind and since ONI is always reported with only one decimal, yes we have an El Nino !!! 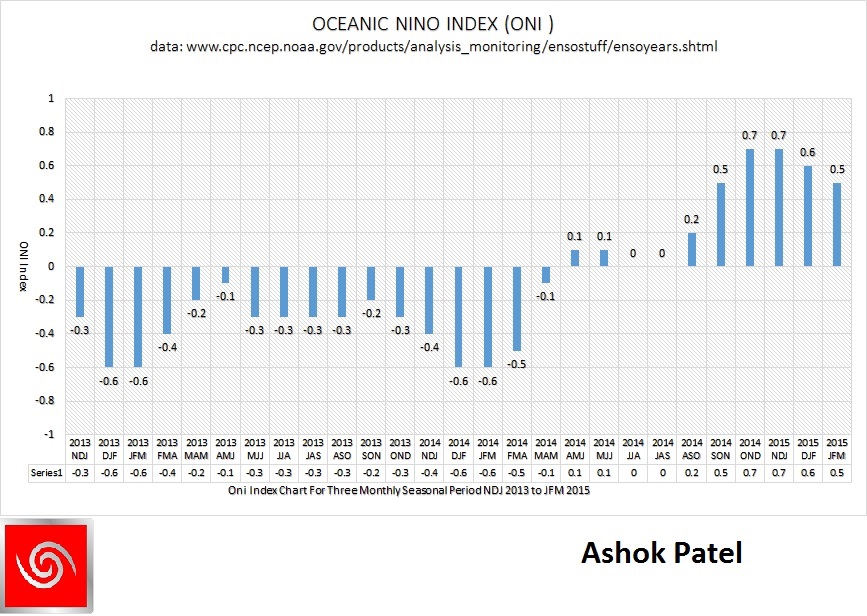 The ONI is based on SST departures from average in the Niño 3.4 region, and is a principal measure for monitoring, assessing, and predicting ENSO. Defined as the three-month running-mean SST departures in the Niño 3.4 region. Departures were based on ERSST.v3b till June 2015 and from then on wards are now based on a set of improved homogeneous historical SST analyses (Extended Reconstructed SST – ERSST.v4). The SST reconstruction methodology is described in Huang et al., 2015, J. Climate, vol. 28, 911-930.).

NOAA Operational Definitions for El Niño and La Niña El Niño: characterized by a positive ONI greater than or equal to +0.5ºC. La Niña: characterized by a negative ONI less than or equal to -0.5ºC. By historical standards, to be classified as a full-fledged El Niño or La Niña episode, these thresholds must be exceeded for a period of at least 5 consecutive overlapping 3-month seasons.

CPC considers El Niño or La Niña conditions to occur when the monthly Niño3.4 OISST departures meet or exceed +/- 0.5ºC along with consistent atmospheric features. These anomalies must also be forecast to persist for 3 consecutive months.

Due to the adoption of SST departures from average in the Niño 3.4 region which is now based on a set of improved homogeneous historical SST analyses (Extended Reconstructed SST – ERSST.v4), the El Nino declared at the end of March 2015 went bust. Subsequently the current El Nino event was confirmed at the end of August 2015. The graph below shows that currently, a strong El Nino persists till March 2016, the last available 3 monthly season being JFM 2016. It also shows that the full fledged El Nino declared JFM 2015 went bust because the ONI index for JFM 2015 was marked down to +0.4 C  which is below the El Nino thresh hold. 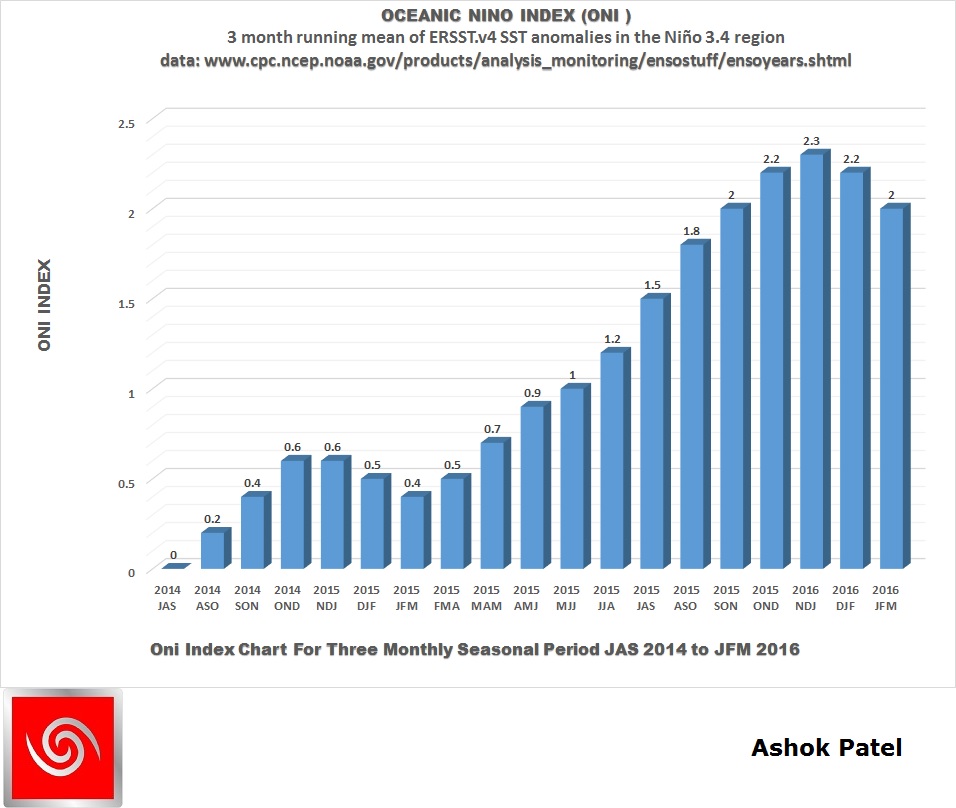 Many past El Nino events have been downgraded or cancelled and some new La Nina events have been declared retrospectively  and in the same way some La Nina events have been upgraded to ENSO neutral conditions and ENSO neutral conditions have been classified as El Nino events due to the introduction of  Extended Reconstructed SST – ERSST.v4. The details of past ENSO events can be compared as per current ERSST.v4 and earlier ERSST.v3b available here ERSST.v4 and here ERSST.v3b. Image file has been created from screenshots of the ONI tables from respective links for convenience.

ENSO Outlook
An alert system for the El Niño–Southern Oscillation

The ENSO Outlook is now at La Niña WATCH. While the current El Niño is expected to persist until late autumn or early winter, there are early signs that the chance of a La Niña developing by spring 2016 (Southern Hemisphere) has increased.

The La Niña WATCH criteria have been met following expert assessment of the steady cooling in the surface and sub-surface of the tropical Pacific Ocean and updated model outlooks indicating increased likelihood of cooling to La Niña thresholds by spring (Southern Hemisphere) 2016.

A La Niña WATCH means that there is approximately a 50% chance of a La Niña developing in 2016, which is about twice the normal likelihood. 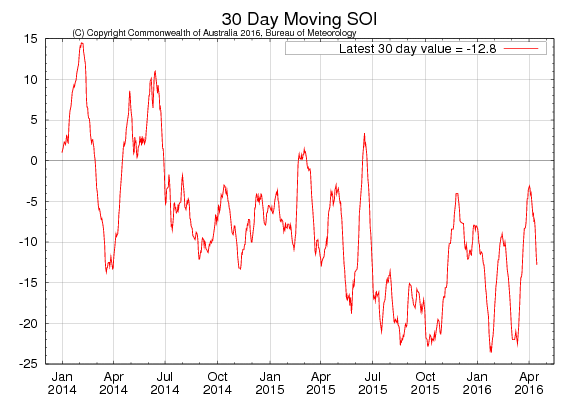 One Reply to “NOAA Introduced Version ERSST.v4 From June 2015 Instead Of Version ERSST.v3b For SST Departures – Resulting In Changes To Many Historical ENSO Events”