Here below is a 2 page IMD Press Release Document. Click Page Up Down arrows at the bottom left corner on the Document page to read all the pages.


The Maximum Temperature yesterday increased over large areas of Saurashtra, Gujarat & Kutch. The Hot Centers all were above 44.0 C 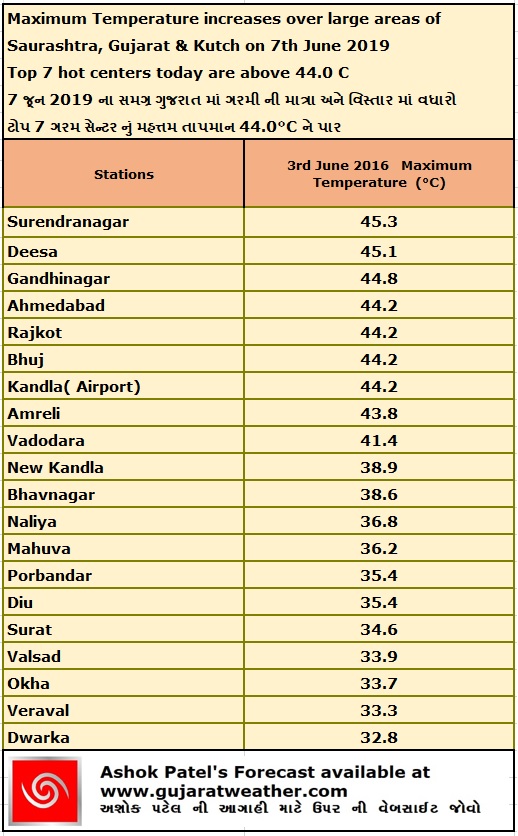 In view of the enhanced cloudiness, strengthening of westerlies and persistent cyclonic circulation in lower & mid-tropospheric levels over Lakshadweep area and neighbouhood, the southwest monsoon has further advanced into some more parts of south Arabian Sea, most parts of Lakshadweep area , some parts of Kerala & south Tamilnadu, remaining parts of Maldives – Comorin area, some more parts of southwest, southeast & Eastcentral Bay of Bengal and some parts of northeast Bay of Bengal. Thus the southwest monsoon has set in over Kerala, today, the 8th June 2019.

Conditions are favorable for further advance of Southwest Monsoon into remaining parts of South Arabian Sea, Lakshadweep area & Kerala, some more parts of Tamilnadu, southwest, southeast, east-central & northeast Bay of Bengal and some parts of central Arabian Sea and west-central Bay of Bengal during next 48 hours.

Conditions are also becoming favorable for advance of southwest monsoon into some parts of Northeastern states during the same period.

The off shore trough from south Maharashtra coast to Kerala coast persists. 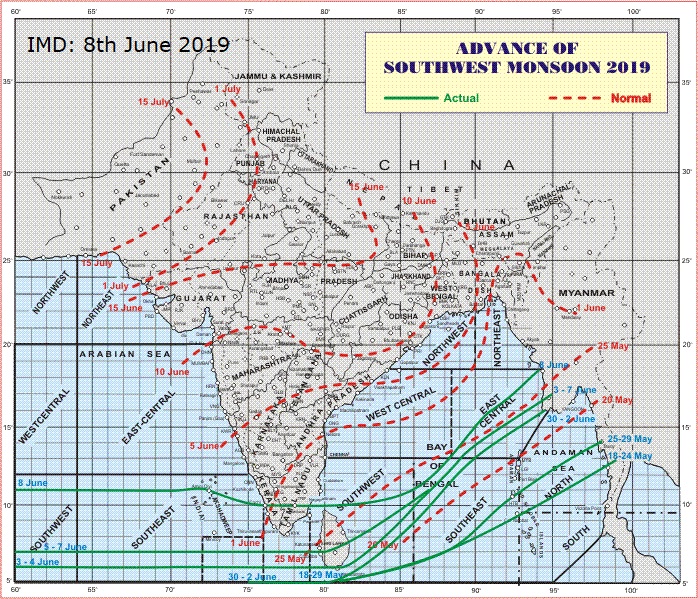 The date shown at the end of green line shows that the Southwest Monsoon has set in over areas below the green line on that date.

The Upper Cyclonic Circulation over Southeast Arabian Sea extends up to 4.5 km. above mean sea level. This potential System is being monitored as 93A.INVEST. Location at noon was Lat. 9.6N & Long. 72.5N. Under the influence of this UAC, a Low Pressure area is expected to develop in the next 24 hours. There is a differing outcome in forecast track by the two main Forecast Models ECMWF and GFS, although both show that the Low Pressure will gain strength in the up coming days. Windy Map of the potential System is shows the outcome on 13th June morning, both for ECMWF and GFS. Further update will be given on Monday the 10th June 2019. Pre-monsoon activity could occur over South Gujarat and Coastal Saurashtra during the later parts of forecast period. Temperature over Saurashtra, Gujarat & Kutch is expected to remain high but with marginal decline. Humidity will increase during the forecast period. 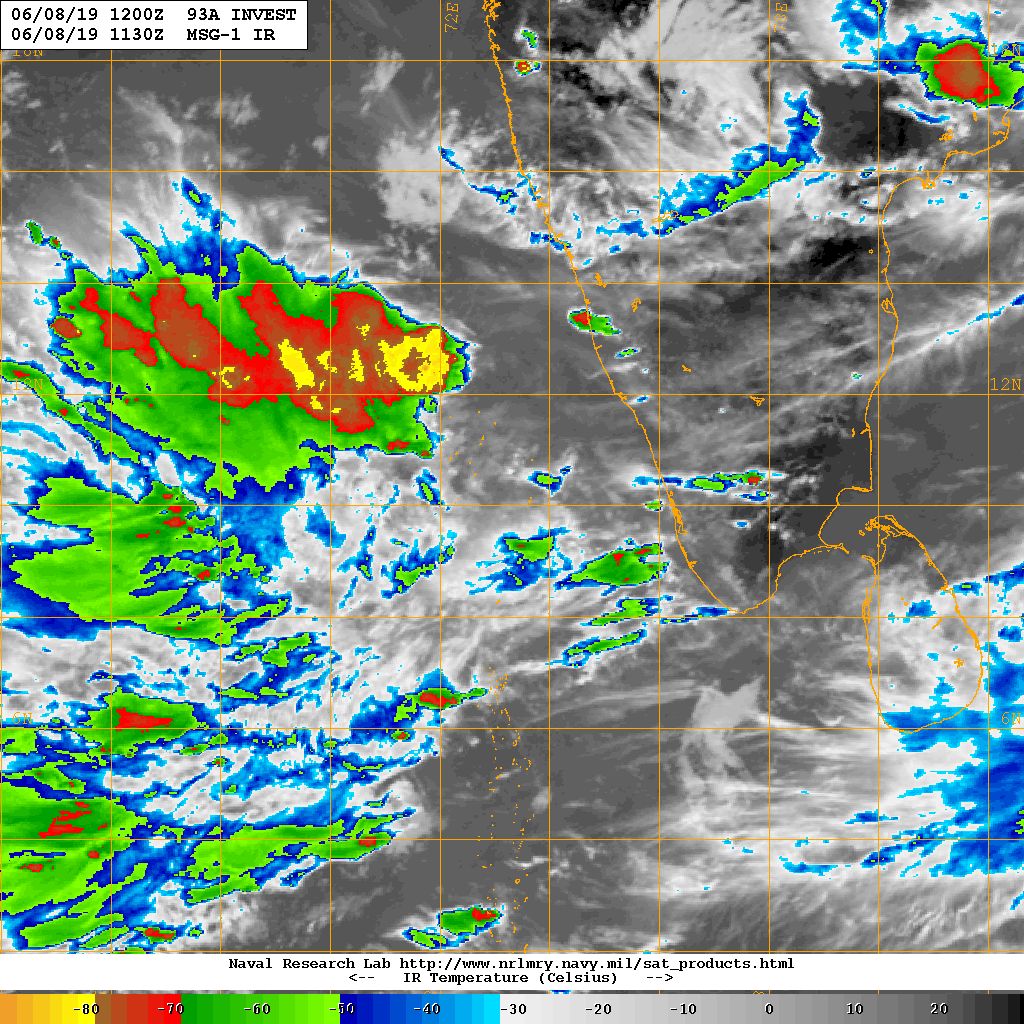 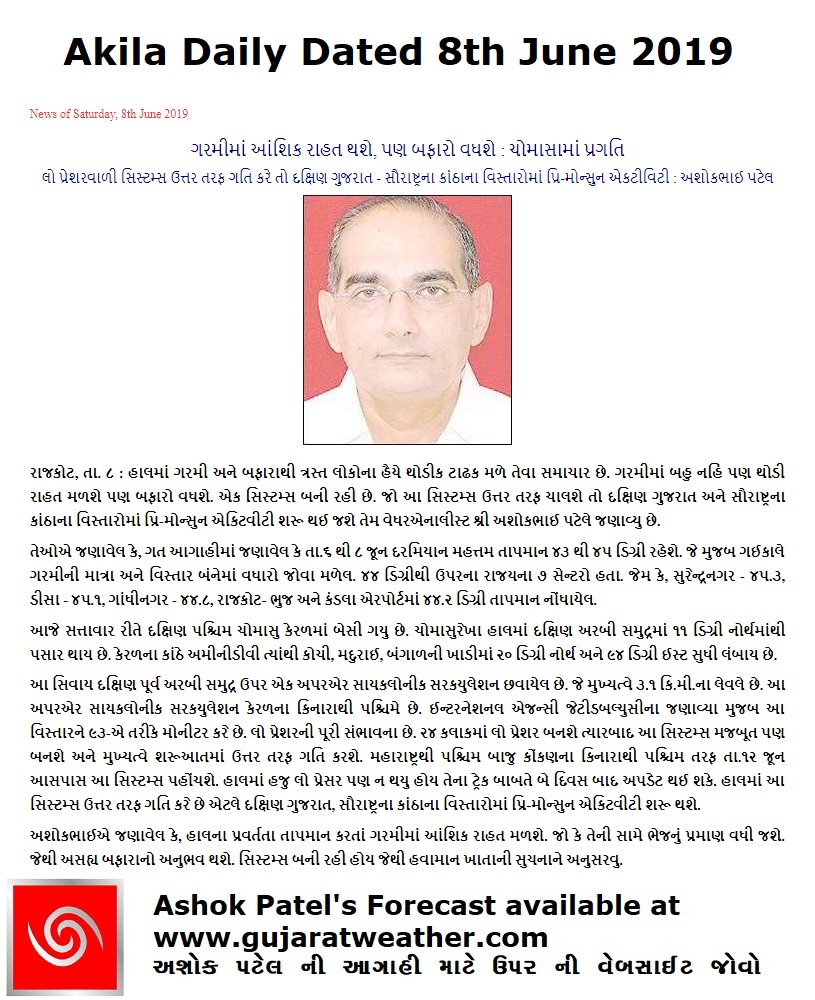 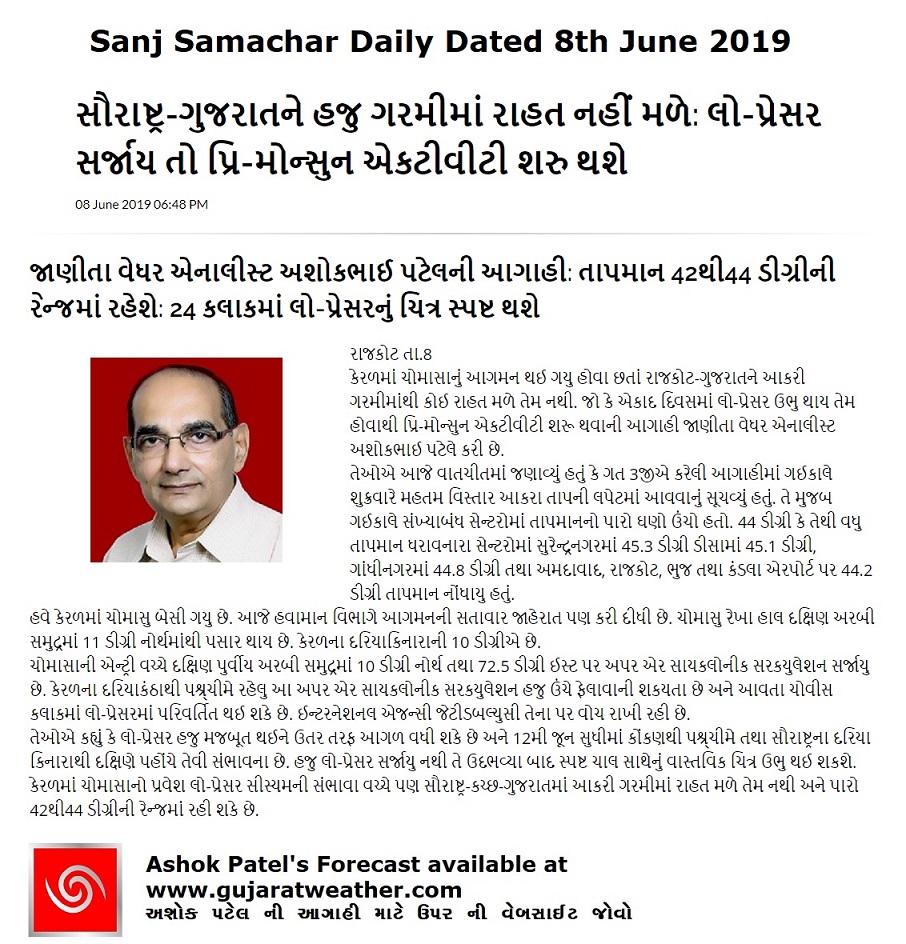